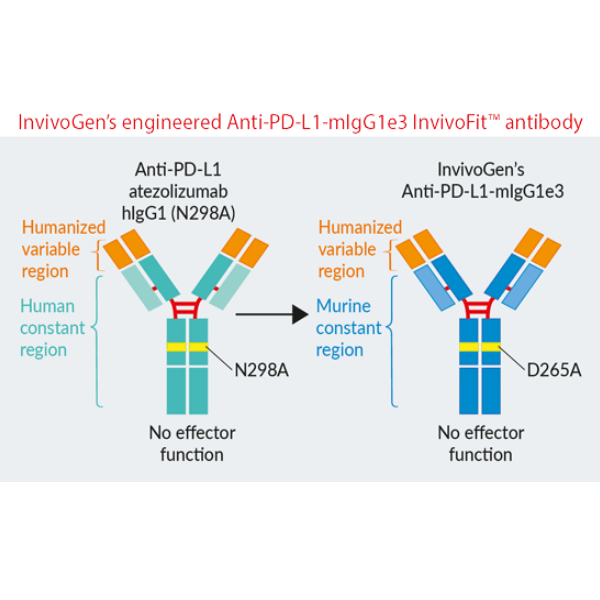 Anti-PD-L1-mIgG1e3 InvivoFit™ is a recombinant monoclonal antibody (mAb) designed for in vivo studies in mice. It features the variable region of the anti-PD-L1 atezolizumab [1] and the engineered murine IgG1e3 constant region.  Programmed cell death ligand 1 (PD-L1; also called B7-H1 or CD274) is a transmembrane protein expressed on antigen-presenting cells. PD-L1 binds to programmed cell death protein 1 (PD-1) on T cells and contributes to T cell exhaustion during chronic infections. Moreover, it has been shown that the engagement of PD-1 on T cells by PD-L1 on tumor cells is associated with the immune escape of tumors. Clinical trials have highlighted the anti-tumor efficacy of blockades targeting the PD-1/PD-L1 pathway [2].

Atezolizumab (formerly known as MPDL3280A) is a therapeutic mAb that binds human and murine PD-L1, blocking the interaction with its receptor programmed cell death 1 (PD-1). Notably, atezolizumab contains an engineered constant region designed to limit effector functions, such as antibody-dependent cellular cytotoxicity (ADCC) and complement-dependent cytotoxicity (CDC) [3]. However, as it is a humanized antibody, it is immunogenic in mice. To overcome this issue, Anti-PD-L1-mIgG1e3 InvivoFit™ was generated by recombinant DNA technology so that it is ~65% murine (constant region). Importantly, its constant region contains a point mutation D265A (a replacement of aspartic acid by alanine at position 265), resulting in the complete loss of cytolytic effector functions [4].

Anti-PD-L1-mIgG1e3 is provided in an InvivoFit™ grade, a high-quality standard specifically adapted to in vivo studies.

Anti-PD-L1-mIgG1e3 InvivoFit™ is produced in Chinese hamster ovary (CHO) cells and purified by affinity chromatography with protein A.  Its binding is validated by flow cytometry and ELISA.